The purpose of the exercise was to test the benefits and usefulness of DLL lights during sailing in the dark at night. 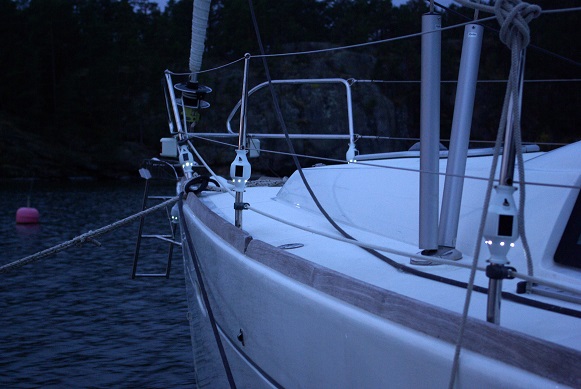 sel. The dock area is dimly lit but the DLL provide sufficient light and made safe movement on deck possible while unfastening the ropes. One could clearly see the perimeter of the gunwale, which gave a sense of security and made walking on deck much easier.

We left our mooring position and manouvered to the refuelling pier, which is well lit but the DLLs emphasized the perimeter of the boat showing the position our at the pier clearly. They also allowed movement on the shadowed side of the boat easier.

Finally we disembarked and set sail to the open night sea. DLL again proved their usefulness as we gathered the fenders and ropes. No additional cabin lights or torches were necessary. As we left the harbour the pier lights grew dimmer and the DLL were the only light sources. The further we went out to sea the darker it got which made DLL even more important. The lack of ambient light accentuated the luminance of the DLL.

As we motored out of t 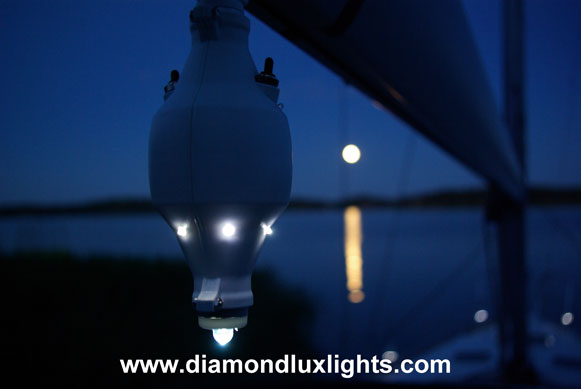 he harbour the DLL BOOM SUN light the cockpit, which made steering and overall operation easy. As we progressed, we were able test and get a clear idea in practice of the deck and cockpit with and without the DLLs.

The DLL BOOM SUN made moving around the cockpit easy and proved to give sufficient light while sailing at night.

As navigation between the markers became more extreme due to the narrow passage, we switched of the BOOM SUN to avoid light from above decreasing our night vision. During the test run we experimented with different positioning of the DLL on the railings and stanchions to get a better feel and understanding on their effect on overall navigation and vessel operation.We tested sailing with all lights off and after 20 minutes in pitch darkness the deck virtually disappeared into the dark and safe movement was impossible.

POSITIONING OF THE LIGHTS 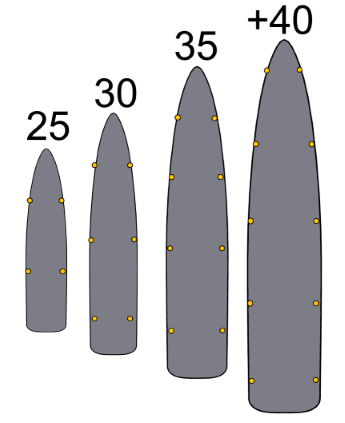 We started off with two DLLs positioned in the middle of the boat on each side, starboard and port as we thought this might be sufficient also to illuminate the bow and stern. The idea sounded ok but as we passed the light we shadowed the area.

Placing two DLLs in the bow was sufficient when moving towards the bow lights but returning was not safe as the lights were shadowed. The white lights in the bow did not hinder spotting any markers in the dark they actually helped by illuminating the sides.

This positioning helped to define the boat as it gave better indication of overall space and distance when moving on deck but the mid section was still too dark.

This was nearing optimal positioning and it made safe passage all around deck possible. The overall length of the vessel will determine how many DLLs are sufficient.

The optimal height for DLL SUNs are close to deck, around 20 cm as this way the lights will not obstruct or hinder sight while navigating and using binoculars. The BOOM SUN was switched on and off as needed

As we return to port we started to prepare ropes and fenders well in advance. At this point the DLLs proved extremely useful and all lights were on.

We returned to port in pitch darkness and needed to use a hand torch to find the pier and the correct mooring spot. Having found it we switched of the torch.

The DLL lights gave sufficient illumination to do the mooring and tie the ropes and fenders appropriately and it felt safe to walk on the dark pier as well as the DLL SUN deck lights lit up the entire boat but without disturbing the surrounding area.

While anchored the DLL deck lights illuminated the deck and surroundings and also gave a good indication to other vessels of our presence. Quite often the single anchor light in at the end of the mast is not sufficient and visible enough. 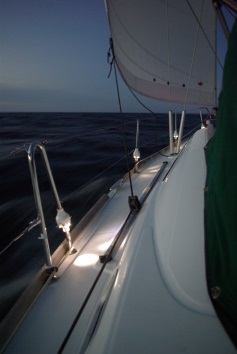